From GeoGebra Manual
(Redirected from Images)
Jump to: navigation, search

This article is about a GeoGebra tool.

This tool allows you to insert an image into the

Image tool from the toolbox of Special Object Tools (third toolbox from the right). 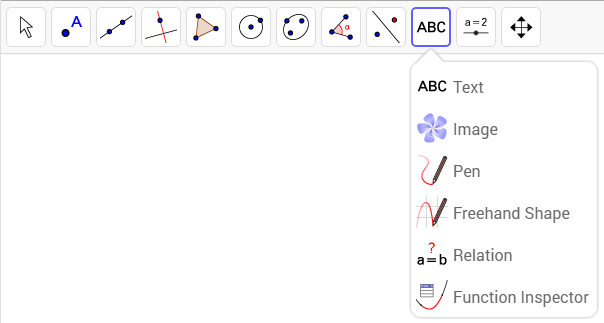 Then, specify the desired location of the image in one of the following two ways:

Then, a file-open dialog appears that allows you to select the image file from the files saved on your computer.

The position of an image may be absolute on screen or relative to the coordinate system. You can specify this on tab Basic of the

Properties Dialog of the image.

Properties Dialog. This gives you the flexibility to scale, rotate, and even distort images (see also Corner command).

Note: This corner may only be set if Corner 1 was set before. It controls the width of the image.

Note: This corner may only be set if Corner 1 was set before. It controls the height of the image.

Example: Create three points A, B, and C and insert an image into the

Graphics View to explore the effects of the corner points.
Example: In order to attach your image to a point A, and set its width to 3 and its height to 4 units, you could do the following:

Note: If you now drag point A in

Move mode, the size of your image does not change.

Properties Dialog. A background image lies behind the coordinate axes and cannot be selected with the mouse any more.

Note: In order to change the background setting of an image, you may open the

Object Properties from the